Sometimes you need a little break from the place you are in order to refresh your perspective. Ready to have a new adventure, I bought the inexpensive $32 roundtrip Amtrak ticket to Baltimore, Maryland. My goal was to explore as much of “Charm City” as I could in my nine hours there.

The train ride was fast, easy, and relatively scenic in parts. Having 45 minutes to decompress and watch the fall colors race by is quite lovely. I also cannot resist travel by train because I think it is one of the most wonderful sensations. 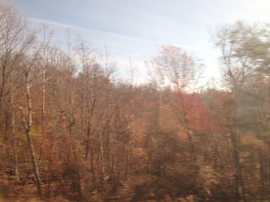 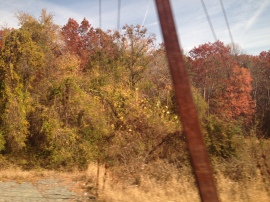 The train drops you at Penn Station which is in Charles North, a trendy neighborhood with brick walk-ups, bars, and restaurants. Baltimore must have known I was coming because upon stepping out of the train station I was greeted by a small arts and farmer’s market. They immediately had me. After taking a spin around, I got a mexican hot chocolate to warm me on my walk to Lexington Market. 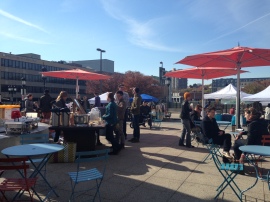 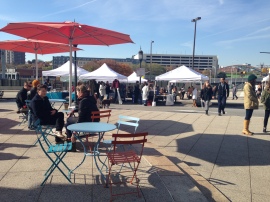 The walk to Lexington Market cannot be said to be the most scenic but it was easy enough. Lexington Market is not in a very great neighborhood but is 100% worth the trip. I really haven’t found a food market in The States that can compare to Lexington Market, picture The San Francisco Ferry Building or Eastern Market kicked up 5 notches. There are food stalls, grocers, butchers, delicatessens, fisheries, liquor marts, and everything else imaginable enclosed in an enormous two-story building, covering half a city block. Forced to ignore the delectable fried chicken stalls I headed to Faidley’s Seafood for their “award winning” crab cakes. Faidley’s had a raw bar and a cafeteria style system for hot and prepared foods. I ordered a jumbo lump crab cake, pickled beets, and topped it off with a classic, home-brewed sweet tea. The crab meat was beyond-buttery, perfectly seasoned with old bay and carefully seared to perfection. The pickled beets were the prefect, crisp, tangy pairing to my giant crab cake. Faidley’s certainly satisfied all the hype. Lexington Market was bustling and rocking, featuring a live band in the center that attracted a huge crowd. After a quick spin around the rest of the stalls it was time to walk off my meal and head to The Walter’s Museum. 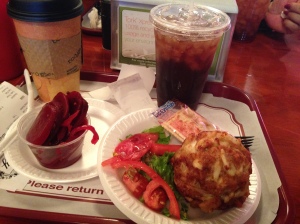 The Walter’s Museum is a beautiful, comprehensive museum that is free and definitely worth a stop. If renaissance art is your thing, The Walter’s has got you covered. The museum also boosts a lovely impressionist collection, including Monet’s Springtime and other must sees. The Walter’s also has a room of assorted odd curiosities that will appeal to any anthropologic inclinations you may have. My personal favorite was the bookbinding room, which displayed intricately crafted covers and bindings that were stunning.

Now it was time to hit the water front. A jump on the free, Charm City Circulator bus took me straight to the Baltimore’s Inner Harbor that has been built up and commercialized but does have great views and a sweeping promenade. 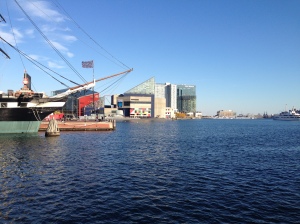 I walked along the water to the American Visionary Art Museum, a museum that is so bizarre it is impossible to describe. All I can say is that it is wacky, weird, but totally cool. John Waters, an extremely talented film maker, once said, “I would never want to live anywhere but Baltimore. You can look far and wide, but you’ll never discover a stranger city with such extreme style. It’s as if every eccentric in the South decided to move north, ran out of gas in Baltimore, and decided to stay.” This quote could not fit The Visionary Museum more perfectly and pretty much the rest of the city as well. 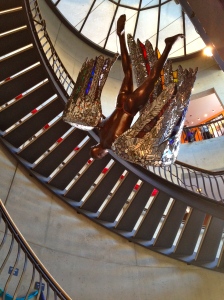 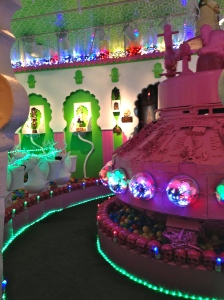 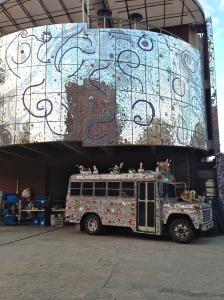 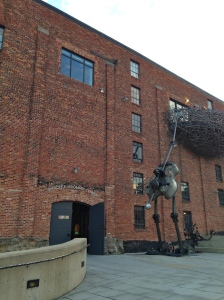 Hopping back on the Circulator it was time for a coffee break. I selected the Bohemian Coffee House, an easy five minute walk from the train station. (Stay tuned for a separate coffee shop review).

Before catching my nine o’clock train I grabbed a bar seat at The Chesapeake Baltimore that unfortunately proved to have the most horrendous service I have ever experienced, backed by less than impressive food. This was the only miss of the trip, so I will have to hunt for a better dining option for my next visit.

My overall impression of “Charm City,” is that really rather than trying to be cute and “charming” it is a city that is real. Baltimore is gritty, diverse, and urban to the core. These features make it distinct and give it a unique character that should not be missed. 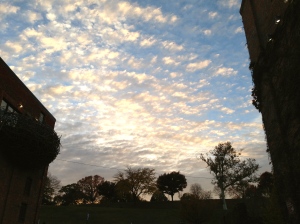