This new segment was created by Morgan Rana. Rana is a surfer from New Jersey and he knows his fish taco game. He is currently traversing the country from East to West in search of taco perfection. I hope to continue this segment as he is currently exploring the DC area for future fish taco face-offs. Enjoy and let us know what you think. Isn’t Ranasan, the taco master cute? 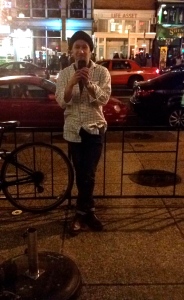 Welcome to Fish Taco Faceoff: a bout between two contenders from throughout the nation who claim champion pescado perfection. In this faceoff, our contenders hail from opposite coasts: Haggo’s Organic Taco of Leucadia, California, and Panzone’s Pizzeria of Surf City, New Jersey.

In the placid beach town of Leucadia, CA you can find Haggo’s Organic Taco nestled on the corner of the 101 and Jason Street. Lined with sun-kissed seating and an aesthetic appreciative of Wes Anderson, this lunchtime taco shack serves up a killer menu and a killer vibe free of genetically modified organisms. But you’ve got to be quick. This shack only sets up shop from 11-4, so like a firing morning swell; you could find yourself spending the rest of your day wondering what you missed out on.

Facing the Atlantic Ocean we find Surf City, a borough on a barrier island along the New Jersey Coast known as Long Beach Island. When it comes to pizza, locals have been paying patronage to Panzone’s Pizzeria since 1980. This parlor provides classic New Jersey barstools and booths where you can find the latest local buzz from the forecast to firehouse parties. In the summer of 2014, Panzone’s shook up the Island’s taco scene when they introduced their seriously seasonal, seriously supreme fish tacos. So if you find yourself on Long Beach Island between May and September, scoop some up!

First and foremost to a prime pescado taco is the fish; its type, freshness, seasoning, and preparation. Haggo’s delivers the first blow with fresh, locally caught fish on the daily. Usually consisting of halibut, mahi-mahi, tilapia, or cod, their fish finds a nice balance of battering before being fried. Lacking in spunk, Haggo’s surrenders the rest of the round to Panzone’s, who serves up some killer cod. Naked and soaked in savory blackened seasoning, their cod charred to perfection on the grill, leaving them with smokiness and hints of cumin, lime, pepper, and garlic. Small and unassuming, Panzone’s blackened cod delivers a near-knockout punch. You couldn’t see it coming if you tried.

If you’re a fish taco traditionalist, Haggo’s is strong pick for you this round. Their double decked corn tortillas hold very true to the OG taquerias scattered along the California coastline. But that’s pretty much all Haggo’s has got going for them. Though house-made, the tortillas taste like cardboard, plain and simple. As for Panzone’s, there isn’t much liveliness from them in this round either. They throw the pescado on standard, white flour tortillas probably sourced from the local market. With no decisive taker to this round, we can leave it to post-faceoff banter to decide who really won. As for now, it’s a draw folks.

After the tortillas are sprawled and the fish placed atop them, it comes down to the toppings.. A winning fish taco can have toppings ranging from a minimal dollop of lime crema to an extravagant combination of salsa, slaw, pico de gallo, and crema. In this round, we see Panzone’s stick to the fundamentals of fish tacos: a ration of shredded cabbage, lime pico de gallo, and a dollop of lime crema – timelessly tasty. But going the distance is Haggo’s with a strong fight in its toppings. They find an interesting balance in their step with a hefty combination of organic cabbage slaw, cumin-lime crèma, mango salsa, and cilantro. This round could go either way. Haggo’s throws down a variety of sweet, savory, and spice to its toppings while Panzone’s holds to simple, strong fundamentals. It’s a tight one folks, but this round narrowly goes to Panzone’s

It was fine faceoff with strong efforts from both contenders, but it is clear that this bout is championed by Panzone’s Pizzeria of Surf City, New Jersey. Though Haggo’s Organic Taco has very strong attributes to its fish tacos along with a charming aesthetic, their strengths don’t stack up quite like Panzone’s. The pizzeria takes the fundamental fish taco and concentrates on perfecting what matters. The balance of perfectly charred cod complimented with simple slaw lime pico, and lime crema wraps up delightfully within a basic flour tortilla. Who knew a pizzeria could deliver such bomb fish tacos?