And the Brooklyn outings move on to new locations…

After spending time in Bushwick it was time to meet back up with Maddy in Greenpoint. Maddy had told me she had a secret surprise that combined two of my favorite things.  We met at McCarren Park, a comprehensive green space that has a track, football field, work out areas and that is opposite the street of the physical park with paths and trees. We ambled along bustling Franklin Street looking at unique boutiques and cafes. We grabbed macaroons at Cookie Road, which we both agreed was a stupid name for a cute bakery. Since the macaroon is my favorite dessert I had to see how it stacked up against the many other samplings I have had. Cookie Road’s macaroons were decent but were a bit too chewy for me. However, a bunch of the other cookies and pastries looked quite good. We stumbled upon Alter, a boutique that mixed vintage and new pieces. The clothes and shoes were very clean and simple, featuring a nice array of niche designers.

After going in and out of a few more stores we arrived at the big surprise, Budin. Budin is a nordic coffee bar and their in lies two of my beloved items-coffee and anything Scandinavian/nordic. I have grand dreams to live in Stockholm or Copenhagen one day, two truly extraordinary cities. Budin was quintessentially nordic with a sleek slate bar and simple Ikea inspired wooden tables and chairs. If you continue to the back, you are greeted by a small offering of accessories and an outdoor patio with delicate wooden folding chairs. The extra special-ness we were trying to be there for was a free cupping of Norwegian coffees that had occurred the previous week. While unfortunately the tasting was not happening this weekend the super kind barista let me sample the cold brew before I purchased it to make sure I approved. All the offerings were light roasts and this one was an Ethiopian rosted by Tim Wendelboe out of Oslo, Norway. The brew was crazy fruity and aromatic, it was almost slightly acidic too-so interesting, different, and good. I absolutely must revisit Budin in the winter so I can sample some more of their imported offerings.

A short walk from Greenpoint takes you to the allegedly ultra hip Williamsburg but after the neighborhood’s four predecessors it seemed less than impressive. The trying too hard Greenwich Village snobby art students seemed to be reincarnated as adults who are not any more or less cool than when they had started. We did find a lovely bakery, Caprice, that had fresh baked goods and a flakey, buttery croissant as big as your head.  along with delicious pastries. There was also gorgeous backyard to relax in that is walled off from the outside world. 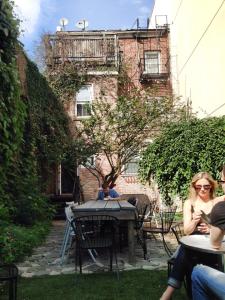 Sunday, brunch day brought us to Park Slope, a neighborhood very reminiscent of Brooklyn Heights. We spied the Brooklyn Public Library from the subway stop, an impressive building flecked with glimmering gold leaf. We headed down Union Street to Rose Water, which blew us away with an exceptional brunch. The prix fixe menu including a drink and entree was a very reasonable $16. Maddy got the Challah French Toast with fresh fruit, creme fraiche, pistachios and cherry chutney. The sweet dish was a very harmonious melding of all the different sweet, nutty and tart flavors. I decided to go savory and ordered the Roast Chicken sandwich with tomato, swiss, bacon, lettuce and a basil aioli served on ciabatta bread. The dish also came with pimenton herb fries which happened to seal the deal on this choice. While seemingly basic the dish was executed flawlessly and the basil aioli and french fries with homemade ketchup were a huge hit.

Before heading off to the airport I again ventured to Park Slope in hopes of visiting the Botanical Gardens and Brooklyn Museum, both being closed on Monday I had to adjust my plan but I did take time to walk around the “mini-Metropolitan” Brooklyn Museum. I headed to Breukelen Coffeehouse to get one last cappuccino before I left. Technically in Crown Heights, the cool, narrow coffeeshop was again serving up Stumptown so my drink was pleasant but not outstanding. I grabbed a slice of bacon and gruyere quiche that was incredibly smooth and rich due to the use of local duck eggs. Wandering on, back down Union Street. I was craving something refreshing and light after my heavier breakfast so I stopped into Union Market and grabbed a Bruce Coast Ginger Ale. Ginger Ale has become my most recent obsession and the unfiltered pomegranate with hibiscus version  from Bruce Coast is a new favorite of mine. I have tasked myself to try some others and will begin some diligent reporting. Bruce Coast is based in Brooklyn so it was a rather fitting selection. I turned on “the other” 5th Avenue where there are also many clothing stores but ones that are far more economical than their Manhattan counterparts. I stepped into Mavi, a premium denim store, Mavi, which is the word for blue in German was started in Istanbul and has a few stores around the world. At Mavi, I found a denim shift dress that was is going to make the perfect transition piece from summer to fall. The shirt dress is easy to wear now with simple wedges and will be smashing with thick tights and a scarf. 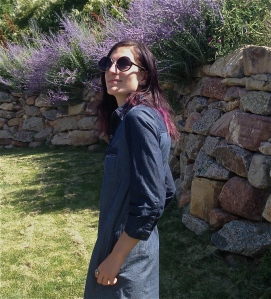